Directly above Mangartsko Sedlo (Forcella Mangart), there is a thin, almost knife-like ridge of rocky towers called Male Špice (Cime Verdi). The peaks in the ridge offer stunning views of the surrounding Julian Alps and represent one of the best spots for landscape photography in the area. Especially at evenings, when the surrounding peaks of Mt. Bukovnik and Mt. Mangart, the ridge of Loška Stena, the Kanin group and Viš and Montaž start to glow in the last rays of sun the views are just amazing.

Male Špice are part of the longer ridge extending from Mangarstko Sedlo to the west, continuing over many saddles towards Predil pass (Passo del Predil). The border between Slovenia and Italy follows the entire length of this ridge. Male Špice are separated from the western part of the ridge by the mountain saddle Sedlce (Forcella Valromana, 2031m) with Mt. Visoka Špica (Cima Alta di Valromana, 2165m) directly above it. On the eastern side the ridge is broken by the notch that separates Male Špice from Mt. Bukovnik towards the north, and the alpine saddle Mangartsko Sedlo separating the ridge from Mt. Mangart. 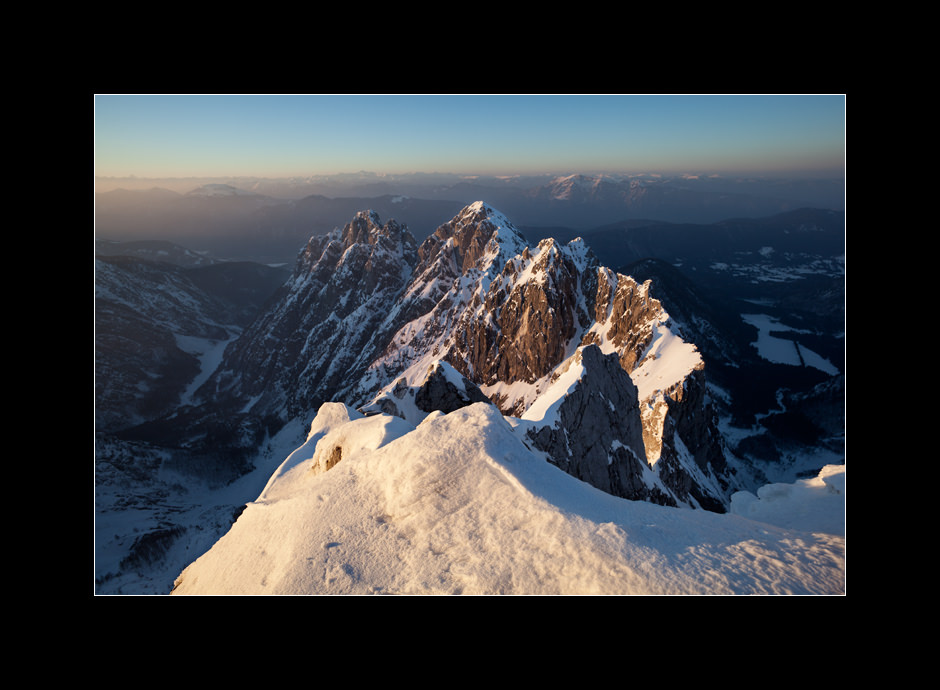 The easiest approach to reach Male Špice is from Mangartsko sedlo (2043m). The road running up to Mangartsko Sedlo is the highest road in Slovenia and is usually opened from June to November. Although the area is one of the most popular parts in Julian Alps, the Male Špice ridge is very rarely visited. The ridge is composed of many towers and 8 notable peaks, but only the most eastern peak is accessible without serious climbing. To reach it you can start from the highest point accessible by the road and walk by marked alpine route towards west in the direction of mountain notch Čez Jezik. After the notch the trail ends and one has to climb steep grassy slopes directly up to the ridge. The top of the ridge is exposed and any fall here is potentially fatal. The other peaks in the ridge are more difficult to reach and some climbing skills are needed. Ascending Male Špice in winter represents a much bigger challenge because the road is closed, and one has to start far below, from the main road over Predil pass (Passo Predil). Appropriate equipment including crampons and ice axe is needed, altogether making it a serious winter adventure.